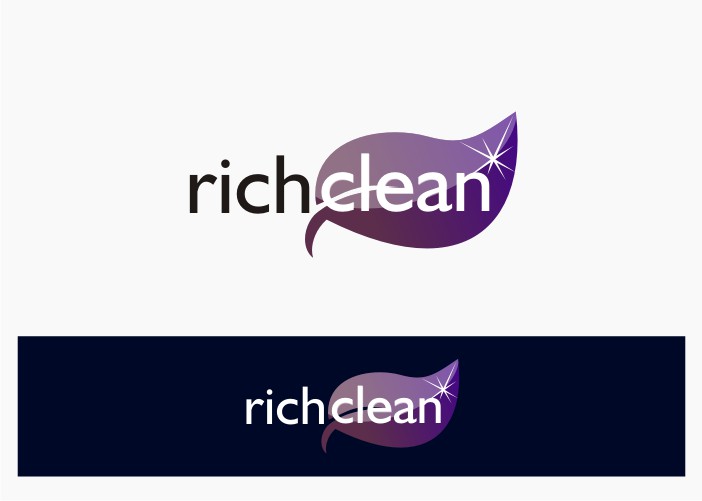 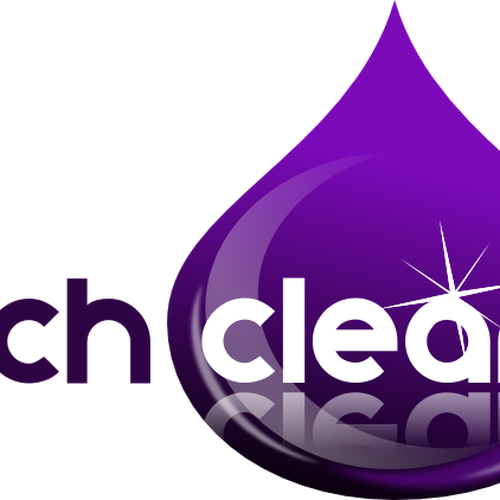 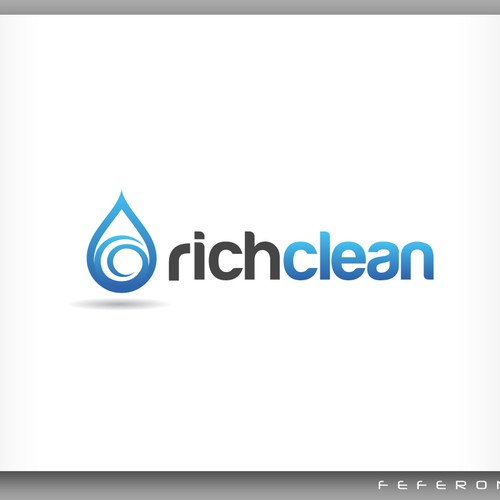 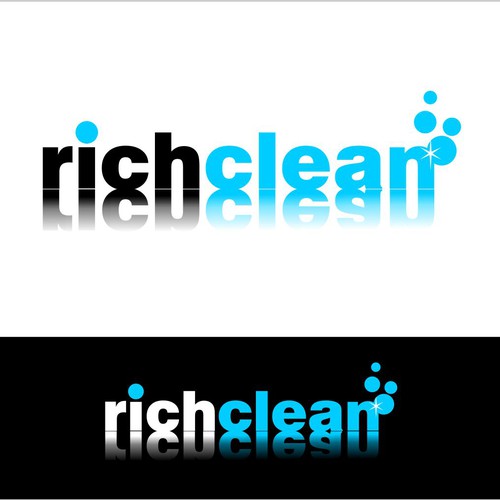 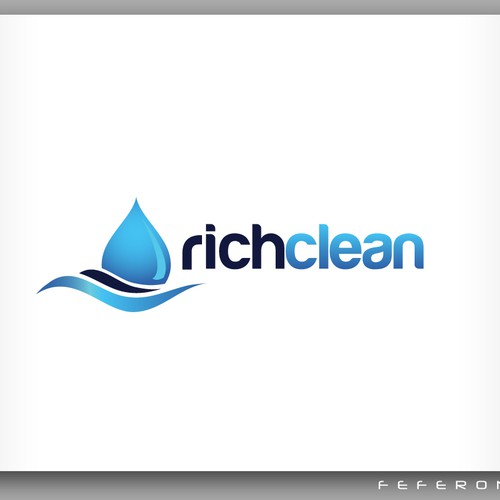 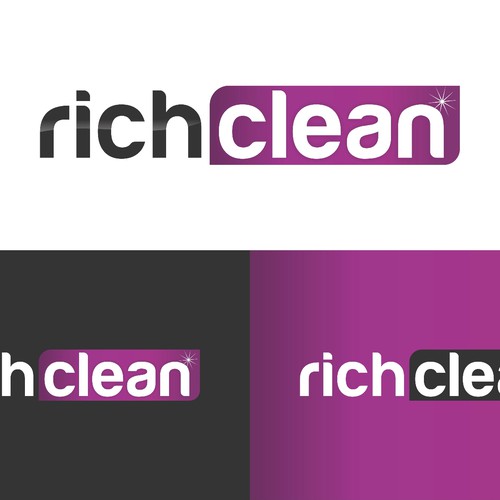 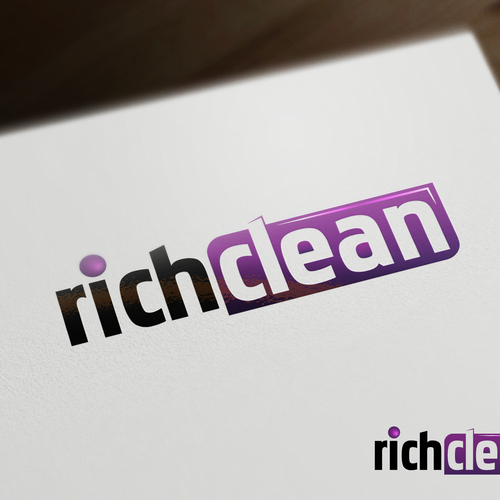 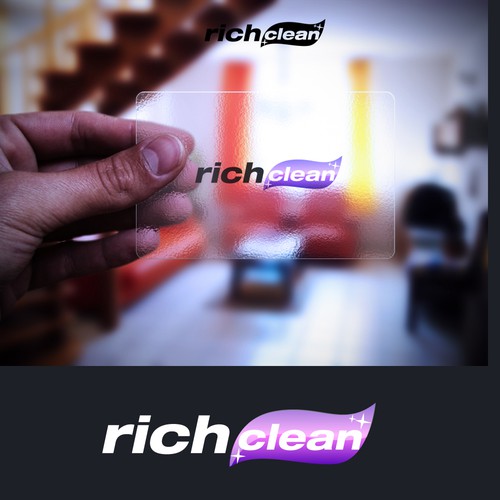 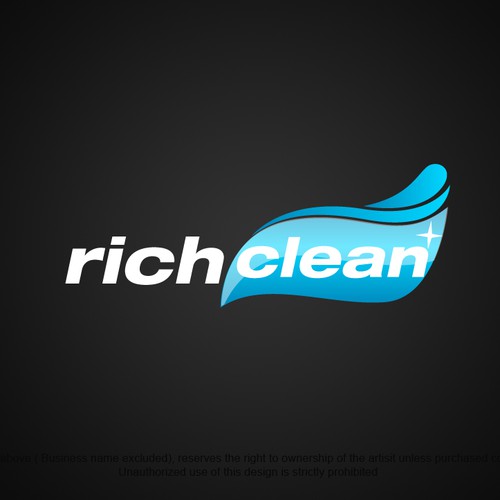 Three ideas been toying with:

1) I was thinking of lower case elongated writing in the kind of facebook youtube form, with a simple 'rich' one colour, 'clean' another with a different colour square around the 'clean' ala the youtube logo but with a taller coloured square and perhaps its edges squarer. So say 'rich' in black, 'clean' in white with a vivid purple/pink (not feminine more the luminous type) or a light (but vivid/ bright blue). The uniforms will be dark blue so dont know if this should be considered or if all be in a white box?

2) In minds eye this idea black on white background but could be a deep blue (open to suggestion on colours though!). The idea here is to kind of look like a schematic drawing, or basic/simple at least. Was thinking on left (and possibly below) a simple rounded edge drawing that is obvoiusly a cooker/oven i.e. the front glass/row of knobs above which then has a couple of lines to represent ventilation ducting above which turn 90 degrees right, 'richclean' is inside the ducting, or at least the 'rich' or the 'clean' is and the other is say below (or above depending of course). The text inside could possibly be italic to represent the air movement whilst the text outside of the ducting could have a gleaming sparkle on the corner.

3)This idea I pictured as slanted/italic with rich being on top of clean (but not set in stone) and another colour wrapping round the text (akin to the Acme example on the wordmark selection to a degree) with a big shiny sparkle star on the top right corner.

All designs a simple use of say three colours; probably white, and the vivid/light purple or blue

Another sort of idea, how about a fan blades picture somewhere and say the i as a ventilation duct i.e. two lines with a two sided triangle atop. -Just throwing thoughts out there. Though the duct and fan pics would look out of placeif expanded to other areas so perhaps not great?

Another one ; pressure/jet washing is predominent in my line of business so how about the silohette of a man jet washing or the shape of a jetting lance and triangles of background colour to represent the water shooting out?

Open to other ideas too... A footnote the work is classed as environmental protection so I have seen rival companies use leaves and greeney colours -though I want to get away from the green.

A last minute idea looking at everyones ideas, how about a mass of sparkle inside the box of colour? Font in there possibly black then, white on outside then (Outlined on white background or perm dark colour behind?)

Bed Bug Removal Logo Contest
USD 299
Products kill bed bugs and target audiences are commercial jobs and residential/apartments. We are bed bug exterminators
157
entries
23
designer
Make a Quick Buck for a Custom Industrial Logo
299 $
We do backflow testing which you can learn more about here (https://www.scottenglishplumbing.net/blog/what-is-backflow-t
56
entries
22
Designer
Coronavirus Killer UVC Light Company
US$ 299
We kill coronavirus! Sanicors sanitizes your place of business using powerful UVC Light so you can relax knowing everyth
113
entries
45
designers
Cleaning for Health is more important now than ever! Create a logo to educate about proper cleaning
499 $US
We are a franchise that performs commercial cleaning. The new logo is going to to promote education about cleaning the
143
entries
39
designer graphistes
Pool Boy Logo Contest!
299 US$
I'm a 16 year old entrepeneur. I'm starting my own business with my little brother. We clean and maintain swimming poo
22
entries
11
diseñadores
Design a clean logo for our Virus fighting stick
USD 299
We manufacture UV light wands that sterilizes and disinfects surfaces and removes 99% of germs, viruses and bacteria
74
entries
20
diseñadores