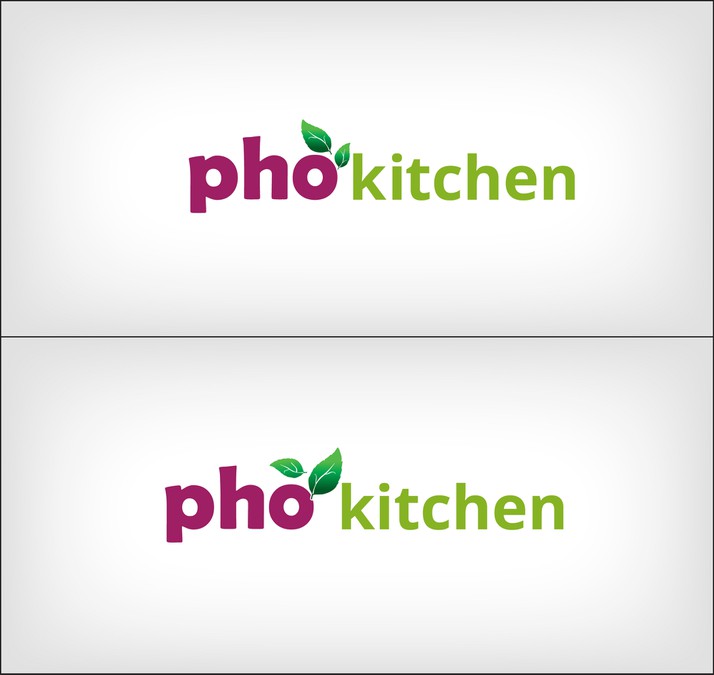 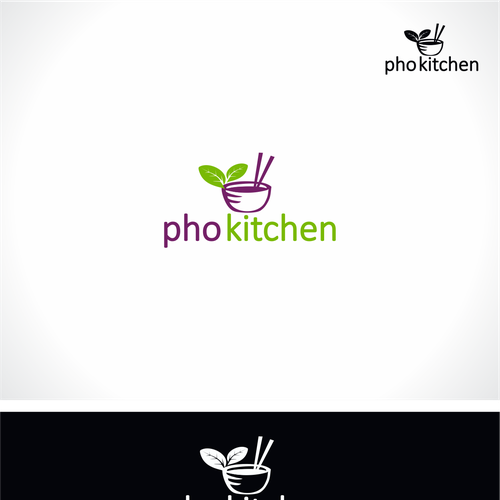 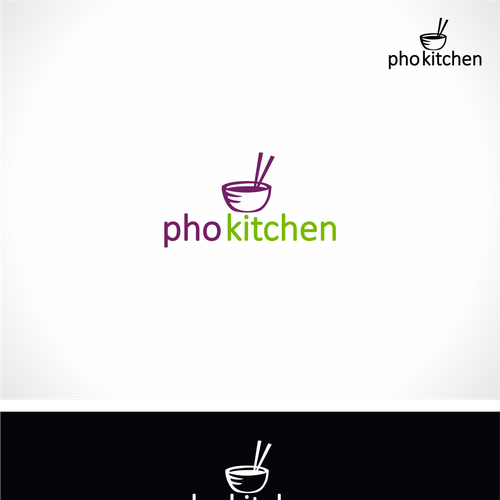 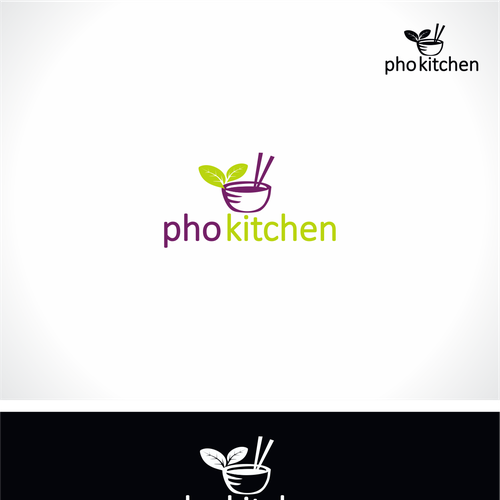 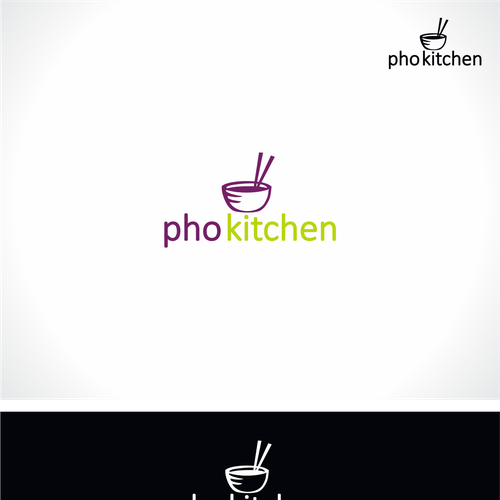 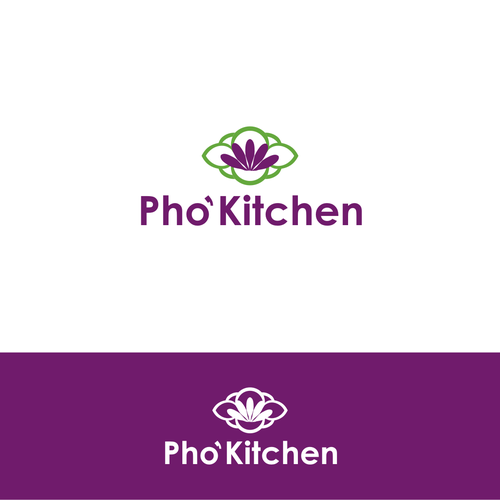 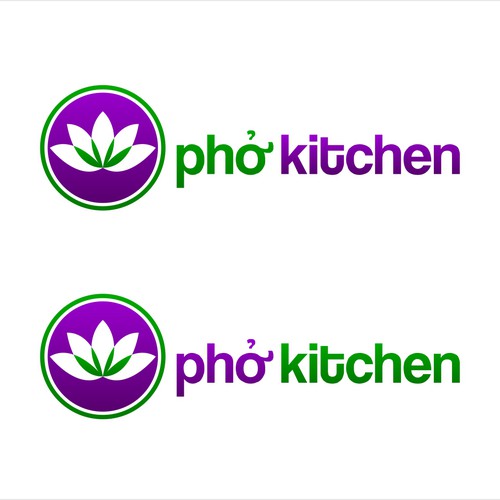 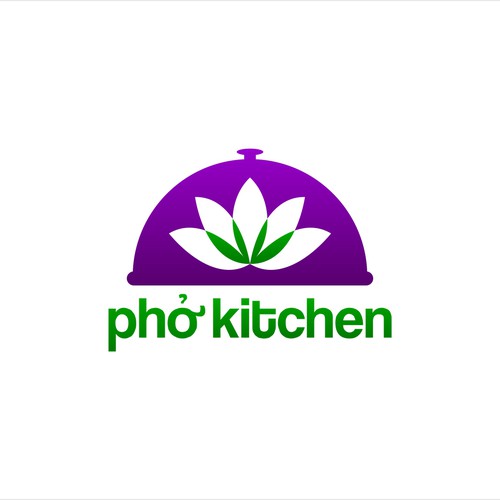 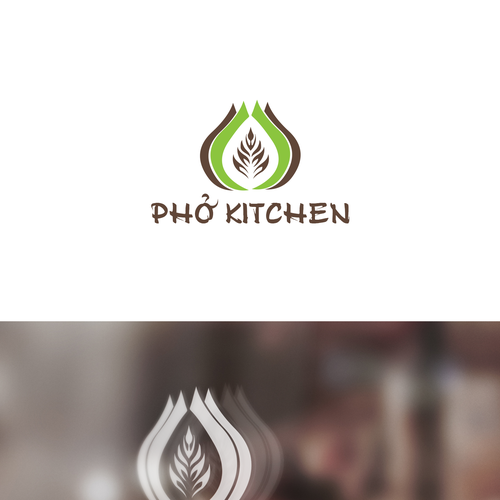 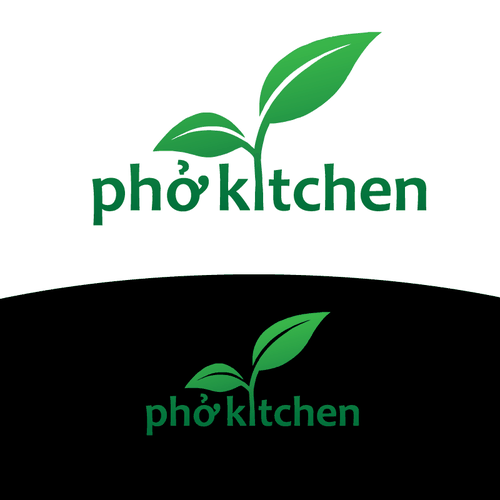 This logo and identity package is being developed for a quick serve dining concept for mall food courts in the US. The first location will be in an upscale mall in Dallas, TX

Pho was certainly a pre cursor to today’s fast food restaurants. phở kitchen will distinguish itself from fast food with a focus on FRESH and NATURAL ingredients. And, like the original street kitchens of Vietnam will prepare items in full view of the customer. Many items will be prepared à la minute, further reinforcing the concept of FRESH.

This logo and identity package is being developed for a quick serve dining concept for mall food courts in the US. The first location will be in an upscale mall in Dallas, TX (http://www.northparkcenter.com). If successful, this concept will be duplicated. The cuisine is Vietnamese. The developer is a 25+ year successful owner, operator and chef of upscale Vietnamese restaurants in the Dallas market.

The restaurant name is: phở kitchen

No restrictions on whether accent marks are used or on capitalization.

Pho is a Vietnamese noodle soup consisting of broth, linguine-shaped rice noodles, a few herbs, and meat. It is a popular street food in Vietnam.
Pho was originally sold at dawn and dusk by roaming street vendors, who shouldered mobile kitchens on carrying poles.

Pho was certainly a pre cursor to today’s fast food restaurants. phở kitchen will distinguish itself from fast food with a focus on FRESH and NATURAL ingredients. And, like the original street kitchens of Vietnam will prepare items in full view of the customer. Many items will be prepared à la minute, further reinforcing the concept of FRESH.

Pho Soups will be just one element of a well-rounded menu.

Vietnam has a long and interesting history that has been shaped by the influence of many outside forces. It was during the Nguyễn Dynasty in the 1800’s, when the French established a colony in Vietnam, when things started to change rapidly. Among many things, the French brought their own food, which slowly but surely began to permeate into all aspects of Vietnamese life.

Perhaps the two most noticeable aspects of modern Vietnamese food that were inspired by the French are coffee and baguettes. It’s hard to walk more than a few feet in any city in Vietnam without getting a whiff of dark Vietnamese coffee, or noticing a pile of freshly baked light brown loaves.

Resulting from this mix of culinary heritage is a Vietnamese staple known as bánh mì, which translates to any form of bread. However, the term has become synonymous with the widely popular Vietnamese sandwich. It begins with a crusty baguette that’s sliced in half, spread with a thin layer of butter and pâté, stuffed with a variety of meats (both grilled and cured), and topped with fresh vegetables and herbs. The result is a truly remarkable fusion of French and Vietnamese tastes that’s ready to eat on the go.

In addition to Pho, Bánh mì will make up an important part of the PK menu offering.

The target audience is mall patrons and employees. Because the mall location is nestled in an affluent neighborhood with easy parking located near the food court, the customer base could potentially expand to the local surrounding neighborhood upon trial. However, the conversion of the food court patron is of first priority.

While we have no direct experience serving this specific audience, we believe that the nature of the core menu offering will not be appealing to the adolescent or young teen. The salad offerings and lighter dishes may appeal to the teenage female.

The complex flavors of the French/Vietnamese menu will appeal mostly to the young adult consumer. We believe the food court customer will very much mirror that of the developers’ upscale restaurant; Male/Female, 30+ Years Old, College Educated. In addition, we will also have a customer attribute that could best be described as affluent.

In certain segments, once the restaurant is known, this concept may eventually compete with the full service restaurants dotted throughout the mall.

Develop a logo that delivers the message that this concept is FRESH, NATURAL and AUTHENTIC.

The Vietnamese flower is the lotus and the darker purples in the lotus are appealing to us. Also, lime is used in many of the recipes so a lime or green is also an appealing color. Herbs are a key to the freshness of Vietnamese cooking and could also be used in the logo as an element (basil leaf).

The sign above the restaurant and the digital signage will be the two most effective methods in delivering the creative. The sign above the counter may alter from the logo as the space is strictly a linear space. Therefore two or more treatments may be needed for the logo (vertical & horizontal). The uniform and service item’s logo treatment will be subordinate to the signage. Therefore, it’s possible that a reverse of the logo or simplification of the logo could be used on the uniforms. For example, Pho Kitchen at could become PK on the visor with an element that ties into the logo/signage.

We will be reinforcing logo creative with professional full color photography on the digital signage. Further, the creative and the “fresh” will be supported by action station food preparation in front of the customer.

Develop a logo and identity package to be used in the following areas:

If possible we would like to pull an element from the logo that could be used in dividing the menu into sections. For example, the word appetizers would be written on or over/under one of the elements. Or, this element would start or finish the category word. This could be a leaf of an herb. A swoosh. A flower. Not to be forced. This would be nice to tie in but not necessary.

The Yacht Club - LOGO DESIGN / REBRAND Contest
$ 299
The Yacht Club is an oasis of hospitality and community, dedicated to providing Chandlers Landing residents and guests a
82
entries
33
Designer
Create a young and trendy logo for a "Poke Bowl" restaurant in Hawaiian style
269 €
Fast Food Restaurant (Poke Bowl) in Hawaii Style for younger people who want to eat fast, trendy and healthy.
171
entries
49
designer
Create a unique logo for a modern buffet restaurant in luxurious and solid style
269 €
"Kaiser von China" means "emperor of China". It´s an asian buffet restaurant with service in a shopping center and the g
66
entries
21
designer graphistes
We need a powerful new logo for our creative pizza concept!
US$ 359
We sell creative pizzas made entirely from scratch to adventurous people who like trying new things and appreciate great
94
entries
29
designers
Design a Logo for a Fast Casual Restaurant - Del Wrap
819 €
We are opening up a new food concept. Mexican and Portuguese fusion wraps (also known as burritos) as well as bowls and
107
entries
34
designer graphistes
Restaurant Company NEEDS an awesome logo!
$ 499
We are an off premise sales solution consulting company for restaurant brands from full service to fast casual with the
149
entries
34
Designer